Why do we flock to spectacular mass events when entertainment has moved into our pockets?

In recent years, the predominant trend has been towards ever smaller and more personal delivery of entertainment and information, on devices like smartphones and tablets.

Very convenient, of course, and many of us would find it hard to live without our smart devices, but something is seriously lacking.A smartphone is a complete fail when it comes to delivering the heart-thumping excitement and dramatic impact of large-scale events, with their spectacular visual effects and the mass emotion of vast crowds. 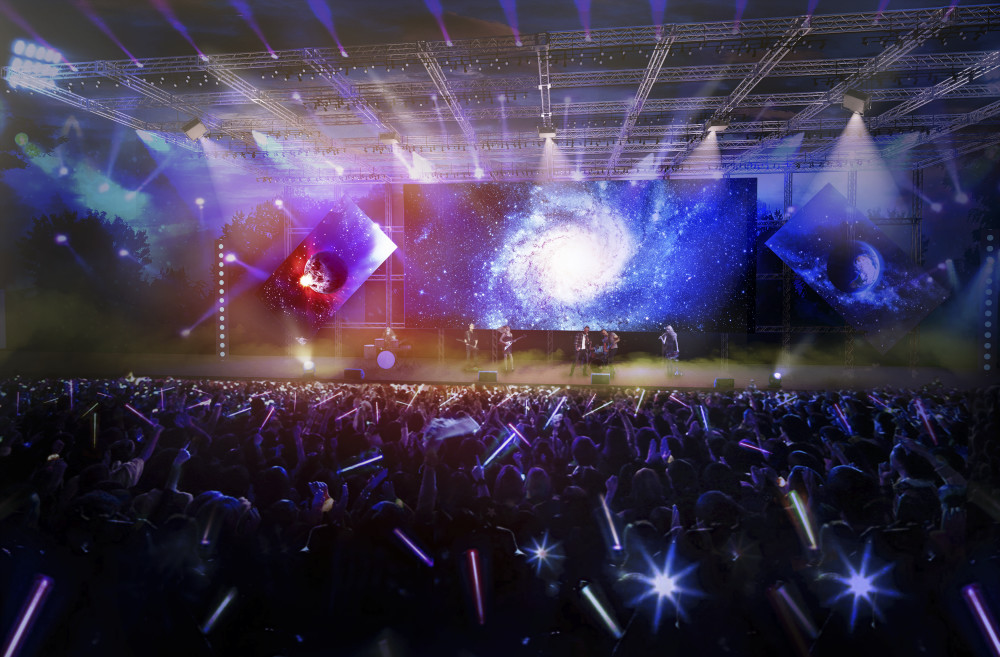 Throughout history, people have flocked to massive-scale events at arenas, concert halls, stadiums and outdoor venues. Although so much individual personalised information and entertainment is now available to consumers on the go, there is paradoxically at the same time an even greater demand for the other end of the spectrum. Whether it’s a blockbuster movie, a killer product launch or an unforgettable award ceremony, large-scale public events are attracting ever-larger audiences – and those audiences are demanding increasingly engaging and captivating experiences.

The dramatic impact of major public events has traditionally been due in large part to the efforts of teams of designers, carpenters, painters and props managers in producing physical décor and backdrops – all of which involve the additional and unproductive cost of storage.Legacy AV systems would play their role in the set-up, but although existing projectors have been able to project on various surfaces and in large screen sizes, they have been restricted in terms of location and application due to the limited lifespan of the lamp.

Today however, advanced laser projection technology promises to totally transform the event experience, eliminating the need for physical décor and props, while delivering a visual feast of colours and brightness that will mesmerize the audience.

In the same way that technology has transformed how we access information and entertainment on a small-scale personal basis, it is today’s laser projection technology that is ensuring major public events meet – or exceed – audience expectations.

The most exciting development is in video projection mapping. Today’s generation of laser projectors are a complete game-changer, able to turn any surface - including entire buildings - into a screen.Projections are free of distortion and can include 3D animation and even video.The scale of such projections can be jaw-dropping and hugely exciting for audiences, as they see the architecture of well-known landmarks transformed into dazzling animated canvases.

It is no surprise that Epson, the number-one selling projector brand worldwide, is at the forefront of laser projector technology development.

Epson’s new projectors are the first in the world to include inorganic 3LCD panels and a laser light source with an inorganic phosphor wheel. With this and other features, these projectors deliver spectacular image quality, reliability and flexibility.

AV industry experts believe that the future of projection lies in solid-state technology. Laser phosphor projectors are a positive step in that direction. Compared to the current generation of projectors, laser phosphor combines the benefits of solid-state with a much lower cost of ownership, superior picture quality, and minimum maintenance requirement over a lifetime of several years.

How do phosphor lasers work? Phosphor wheels turn blue light emitted from a laser light source into yellow light. In the new projectors, the blue light from the laser is separated into two. One part is yellow, and the other part combines again with blue light to make white. Using a dichroic mirror, this white light is separated into the three base colors of red, green and blue. These are then passed through their respective LCD (HTPS) panels, put together and then projected on the screen.

Epson’s range of 3LCD laser projectors ensure 20,000 maintenance-free hours of projection. The ability to run continuously without having to worry about lamp life will allow the new projectors to replace existing technologies in several scenarios. These include the home, where people will be able to enjoy TV images on a much larger scale than with traditional LCD TVs, and public locations that currently use LED displays for ads and digital signage.

The EB-L25000U has a sealed optical engine with laser-light source with an inorganic phosphor wheel in combination with inorganic LCD panels, delivering up to 20,000 hours of virtually maintenance-free operation, including 24/7 use for applications that require continuous projection.

There is no doubt that laser phosphor technology is the future of projection.The technology features are robust and proven, and the benefits include spectacular visual experiences for consumers and significant cost savings for rental and staging vendors.